Continuously moving forward in its aim to becoming the country’s international education hub, Sunway Education Group also partners University of Oxford, University of Cambridge, Harvard University, University of Berkeley and other world class institutions. These partnerships have paved the way and opened doors for great academic and cultural project collaborations for not only Sunway University but the other institutions under the Sunway Education Group. Through these collaborations, students are able to gain international exposure without having to leave the country.

In 2016, the Jeffrey Cheah Foundation entered into a partnership with the United Nations Sustainable Development Solutions Network Association (SDSN) and Professor Jeffrey Sachs, renowned economist and Director of the SDSN. With the partnership, the Jeffrey Sachs Center on Sustainable Development was established at Sunway University to create and deliver the world’s best academic and executive programs on sustainable development.

The higher education industry is growing and so are Sunway College, Sunway University and Sunway International School as seen in the increase in the student population on campus. The Sunway Education Group’s total student population today is more than 25,000. As a stalwart supporter of the nation’s education goals, the JCF aims to ensure sustainable quality education for present and future generations of students.

The Sunway Education Group’s institutions offer not only just an academic qualification but a well-rounded education, striving to educate students and prepare them for life by providing them experience in various areas of personal development and responsibility. The development of students’ character, integrity and self-confidence is an essential part of the institutions’ goals.

Through the institutions under the Sunway Education Group, the JCF has to date disbursed more than RM570 million in scholarships to thousands of deserving students. Tan Sri Dr Jeffrey Cheah AO believes that education leads to better futures and lives for the recipients and ultimately for our nation.

The Jeffrey Cheah Foundation champions the spirit of giving back to society and the belief that education transforms lives. 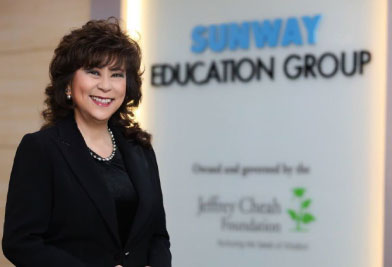